African innovation refers specifically to innovative technologies, startups, and programs developed by Africans for African needs and challenges.[1][2] Most of the discussion around African innovation focuses on innovations for, and on, the Sub-Saharan African continent. 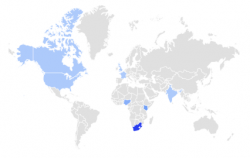 Owing to the fact that the history of science and technology in Africa has received relatively little attention compared to other regions of the world, despite notable African developments in mathematics, metallurgy, architecture, and other fields,[3] it is difficult to track how African innovation has developed until recent times. Several efforts since the late 2000’s have begun to track its development, especially with the emergence of the Africa Rising narrative, [4] which coincides with a post-colonial narrative, and larger spending by African countries into science and technology as the continent embraces technology as a driver for development.

Realising this to be the case, the African Ministerial Conference on Science and Technology (AMCOST) was formed in November, 2003 in Johannesburg, South Africa under the auspices of the New Partnership for Africa’s Development (NEPAD)[5] and the African Union (AU). AU member states committed themselves to developing and adopting a common set of indicators. One of its key outcomes was the adoption of NEPAD's African Science, Technology and Innovation Indicators (ASTII) in 2005 to contribute towards a better quality of Science, Technology and Innovation (STI) policies at the national, regional and continental levels. The objective of ASTII was to support and strengthen the capacity of Africans to develop and use STI Indicators in development planning and policy. It formed part of a larger scheme called Africa’s Science and Technology Consolidated Plan of Action (CPA). The CPA, amongst other things, aimed to build the human and institutional capacities needed to produce common internationally comparable indicators as tools for the ongoing survey of research and innovation at national levels.[6]

However, the CPA came under significant criticism, as it failed to link with pan-African policies. Furthermore, it fell short of raising the necessary funds for its implementation.[7] In 2014, it was replaced by the Science, Technology and Innovation Strategy for Africa (STISA) 2024, which prioritises research for driving economic and social development across the continent. Each signatory must agree to six priorities:

In 2016, the publication Disrupt-Africa launched a data branch to measure the development of the African tech and entrepreneurship space.[8]

One of the most successful examples of African innovation involves the use of mobile money, particularly Kenya’s M-Pesa [9], operated by the telecommunications provider, Safaricom, which is (’pesa’ is Swahili for ‘money’). Originally established in 2007, it has evolved to have 27.8 million active subscribers (2018), in a nation of 45 million people [10]. Through the service, subscribers can transfer money to each other, pay for a taxi, pay duties on import shipments, pay school fees, and more. Google has also integrated it into its app store as a method of payment. [10] It reaches across all levels of income and is often used by urban migrants for transferring money to their home village. M-Pesa has increased its reach into Tanzania, Nigeria, Angola, Albania, the Democratic Republic of Congo, Egypt, Ghana, Lesotho, Mozambique, Romania, and India.

Another example would be M-Kopa, which effectively provides a ‘pay as you go’ solar power service, and is also based in Kenya. Through micro-payments using the M-Pesa service, people who live in rural areas far away from power infrastructure can pay off a solar panel, usually over a year, and then enjoy basic, free solar electricity. Not only is this more financially viable, but it is better for the environment and the health of users, who traditionally would use kerosene lamps (which has harmful fumes).

IrokoTV[11] is another example of an African innovation. IrokoTV is a movie streaming service that focuses on providing and producing Nollywood titles across the world, tapping into an otherwise ignored market. The development of iRokoTV has helped to grow the Nollywood industry quite substantially and make it a big player in the wider movie scene. [12]

Many African innovations have been exported out of the continent. For example, Ushahidi’s crowdsourcing tools; and Andela, a global engineering organisation that was originally based in Lagos, Nigeria but moved its base of operations to New York in 2016, after receiving funding from the Chan-Zuckerberg Initiative.

Some key players include the African Innovation Foundation (AIF), which aims to increase the prosperity of Africans by catalyzing the innovation spirit in Africa. It boldly claims that it wants to see needs-based innovation and change happen. [13]. As part of this it developed the Innovation Prize for Africa in 2011, an annual award that offers a grand prize of US$185,000 and has a network of more than 8,000 African innovators spanning 55 countries. [14]

The World Economic Forum (WEF) has frequently focused on African innovation, as part of its research and annual regional meeting in an African country.

Other key players would be the many innovation hubs around the continent, particularly in Kigali’s Innovation City, located in Kigali, Rwanda; “Yabacon Valley” in Nigeria; and Cape Town in South Africa.

The African Leadership Academy (ALA) has been at the forefront of developing leaders in Africa from a High School age. Students, with the academy, formed social innovation camps in 2014 in an effort to provide opportunities for young students from underprivileged neighbourhoods to identify needs in their communities, learn the tools for effective entrepreneurship and develop ideas and solutions to address those community challenges. [15]

The phrase “Disrupting Africa” or “Disrupt Africa” has become synonymous with identifying technology entrepreneurs and innovators seeking to provide products and services in Africa using technology - though the definition of technology is loosely applied.

Disruption as described by Clayton Christensen is “a process whereby a smaller company with fewer resources is able to successfully challenge established incumbent businesses”.[citation needed] Clayton argues that the theory’s core concept may have been misunderstood as the term he coined in 1997[citation needed] gained global popularity.

Applying the concept to Africa, the proponents of “Disrupting Africa” imply that through technology - particularly African innovation, Africa would be able to transform it’s economic potential, create new target markets[16] and leap frog other continents as a global powerhouse.

The phrase “Disrupt Africa” was first registered by Tom Jackson in 2015 (citation needed) in the form of an online start up portal with “journalists roaming the continent to find, meet, and interview the most innovative and disruptive tech startups”.[citation needed]

“Disrupting Africa: The Rise and Rise of African Innovation”, written by Nnamdi Oranye, which separately catalogued the stories of African entrepreneurs, was published in 2016 and morphed into the Disrupting Africa Encyclopedia which was launched in 2018.[citation needed]

In 2015, the United Nations (UN) released its “World Population Prospects” report, which highlighted the exponential growth of the African continent, with 1.3 billion people projected to be added to the continent between 2015 and 2050. Along with this, much discussion has resolved around the African workforce, with predictions saying that by 2030, Africa will have the largest working population in the world.[17]

This is an important factor for African innovation, because such a workforce could either become a liability to the world, or an advantage to the world. How African nations support and encourage their own innovation, to help curb Africa’s challenges in education and infrastructure, will be key in creating a positive workforce. [source: Taking on Silicon Valley book].[citation needed]