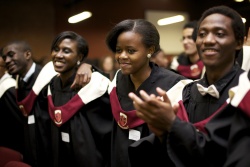 Graduation Ceremony at the African Leadership Academy. Picture: ALA Website

The African Leadership Academy (ALA) is one of the continent’s leading pan-African high schools.[1] It is based in Johannesburg, South Africa. Fred Swaniker, Chris Bradford, Acha Leke and Peter Mombaur founded the ALA in 2004. The ALA curriculum focuses on African Studies, Entrepreneurship and Leadership.

Ghanaian, and co-founder, Fred Swaniker met Chris Bradford at Stanford Graduate School of Business. It was a result of this meeting that the conception of the ALA was formed in order to offer world-class academic tuition to the African continent.[3] In 2004, Peter Mombaur and Acha Leke provided initial funding for the academy, and by June 2005, the ALA’s innovative curriculum was piloted.

The ALA offers a two year pre-university program which uniquely combines Cambridge A Levels with additional core subjects specific to entrepreneurship and leadership.[4]

Entrepreneurial Leadership and African Studies are fundamental to the ALA curriculum. Students are given projects that develop their entrepreneurship skills. African studies include hunger eradication, health care provision, economic growth, and conflict resolution.[5]

The African Leadership Academy received internationally recognition when co-founders Chris Bradford and Fred Swaniker were named Echoing Green Fellows in 2006. Bradford and Swaniker were included in the list of “15 Best Emerging Social Entrepreneurs in the World”.[6] In 2006, ALA won the 2012 Siebel Scholars Impact Award for their contribution to Social Entrepreneurship through education.