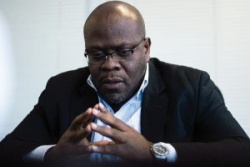 Okoudjou gained popularity for the development of the MTN Group’s mobile payment strategy. Named one of the world’s most innovative companies by Fast Company in 2017,[2] Okoudjou’s successful formation of MFS Africa has established him as a leading entrepreneur in African Innovation.

Okoudjou is a keynote speaker at various technology and economic conferences, both on the continent and internationally.[3]

At the height of the late-nineties dotcom boom, Okoudjou accepted a position as a telecommunications consultant at PricewaterhouseCoopers in Paris. His first assignment was to facilitate the launch of a mobile network in Morocco. Okoudjou credits the fortuitous environment at PwC which connected his understanding of technology and his responsibility towards the larger community.[4]

Okoudjou’s time spent in Paris made him acutely aware of the African Diaspora moving to Europe, and the lack of infrastructure on offer in order to send remittances back to the continent. In 2001, he left Paris and joined an NGO in the north of Tanzania. The NGO administered 30,000 people in a refugee camp in the densely populated Nyanga district. After two months, Okoudjou returned to Paris to start his MBA with the intention of developing Africa’s ailing infrastructure.

After obtaining his MBA, Okoudjou moved to Johannesburg and joined the MTN Group. It was there that he received acclaim for developing their first mobile payment strategy. By the end of 2008, the problem of interoperability with mobile wallets became his primary concern. He resigned from MTN and MFS was birthed.

Okoudjou developed the innovative technology of a single Application Programming Interface (API).[5] MFS Africa were able to connect the majority of mobile wallets in Africa to their central Hub.

The MFS Africa Hub is a single API that runs as an ecosystem for mobile operators, merchants, banks and a variety of other service providers. It services the e-commerce and m-commerce services.[6]

Okoudjou solicited angel investors and family office funders between 2008 and 2009. Their investments contributed to the $500,000[4] needed to start MFS Africa. The initial funding, and sizable contracts from cellphone networks, saw MFS Africa grow from one branch in South Africa to more than 10 on the continent.

At the end of 2011, MFS Africa faced crisis and offers to sell off portions of the business were propositioned. Okoudjou declined to sell and proceeded in his vision for MFS Africa. He did, however seek out funding from well-established, credible stakeholders. Numerous stakeholders came on board and MFS Africa was able to stabilise.

In April 2008, Okoudjou led an unprecedented Series B round of funding which resulted in a partnership between MFS Africa and the LUN Partners Group. This made Okoudjou’s startup the first Africa-based FinTech to be funded by a China-based Venture Capitalist.[7]