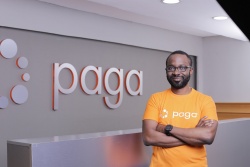 Tayo Oviosu is the founder and CEO of Paga, a Lagos-based mobile money service. Oviosu graduated with a degree in Electric Engineering from the University of Southern California (1998). Oviosu then went on to complete his MBA at the Graduate School of Business at Stanford University (2005).[1]

Oviosu has gained significant praise for his contribution to African Innovation and forms part of the growing return of African Innovators to the continent. In addition to the success of his FinTech startup, he co-founded Kairos Angels,[2] an angel investment club. Oviosu is an investor in ReelFruit, a fruit processing agribusiness and ChopUp, a mobile gaming startup.

Before his return to Africa, Oviosu worked at Biomorphic VLSI,[5] as a Semiconductor Chip Design Engineer and Event411 as a Software Engineer - two startups based in Los Angeles.

Prior to founding Paga, Oviosu was the VP at Travant Capital Partners, a private equity fund in West Africa. After a variety of other positions in High-tech and Private Equity, Oviosu focused his attention back to Nigeria and in April 2009, founded Paga. Oviosu identified the potential of leveraging the established mobile phone boom on the continent and developing the tech to reduce Africa’s dependency on cash. His primary goal was to expand financial access to the underbanked population.[6]

Paga has proved its success in Africa and internationally. In 2014, CNBC awarded Oviosu with the Entrepreneur of the Year West Africa award. The African Leadership Network recognized Paga and Oviosu for the company’s outstanding growth (2015).[7]

Oviosu has led numerous investment expansions and acquisitions for Cisco (worldwide leader in IT and networking). These have included the US$ 130-million acquisition of Reactivity, Aquantia, and Guardium. Oviosu was also responsible for the private sale of 22% of Cisco’s South African operations to a consortium of investors.[2]

Oviosu successfully raised US$ 10-million in Paga’s Series-B funding. The round was led by the London-based Global Innovation Fund. Impact investors, Goodwell Investments, Unreasonable Capital and Omidyar Network, along with Mauritius-based private equity fund Adlevo Capital, were also participants in the round.[8] Paga received a US$ 2-million grant from Enhancing Financial Innovation & Access (EFInA) to develop and deliver low cost financial products through Paga’s nationwide agent network. The EFInA is funded by the Bill and Melinda Gates Foundation.